Today we look at the new version of the popular non-killing box mod Aegis from the well-known manufacturer Geekvape .

Boksmod Aegis from the company Geekvape , released almost two years ago, and to this day remains quite popular among users, as well as one of the most successful products of the manufacturer. The device has earned a lot of positive feedback for its excellent work and, importantly, for its ability to resist many external factors like moisture, dust or falls. Geekvape , of course, could not limit their success to only one device and later released a couple more versions of Aegis . More recently, the fourth “Aegis” entered the market, which we will now meet. 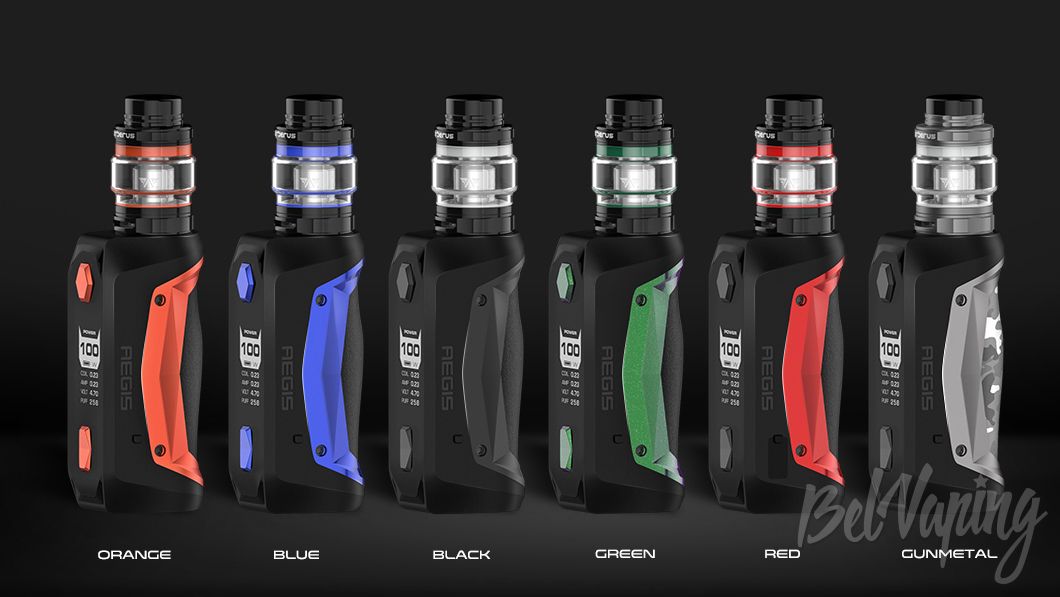 Boxmod can be purchased both separately and in combination with a simple, unattended tank Cerberus Sub Ohm Tank . From the colors offered by the manufacturer, it will be possible to choose orange, blue, black, green, red and gunmetal with a camouflage pad under the curve of the arm. The complete tank, by the way, will have oring that matches the mod body. 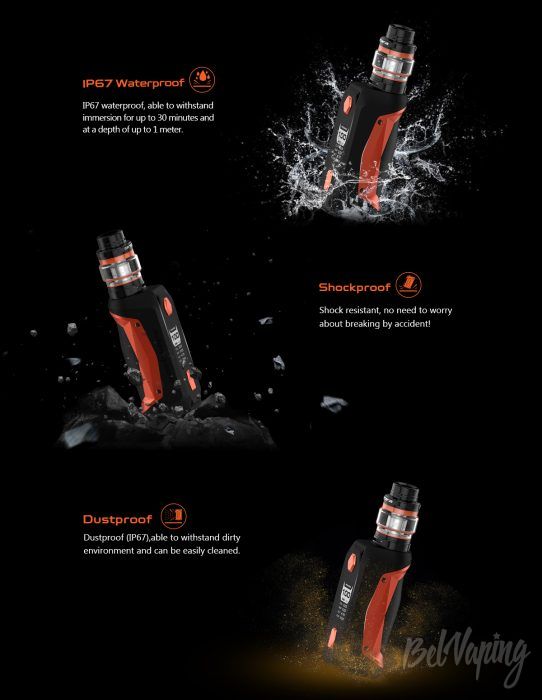 Aegis  would not be himself if he did not have a lot of protection from the environment. So, the device implements protection against moisture according to the IP67 standard, which means that the mod is able to withstand immersion in water to a depth of one meter for a duration of half an hour. In addition, the novelty must withstand a fall on a hard surface, and also does not miss the dust and sand. 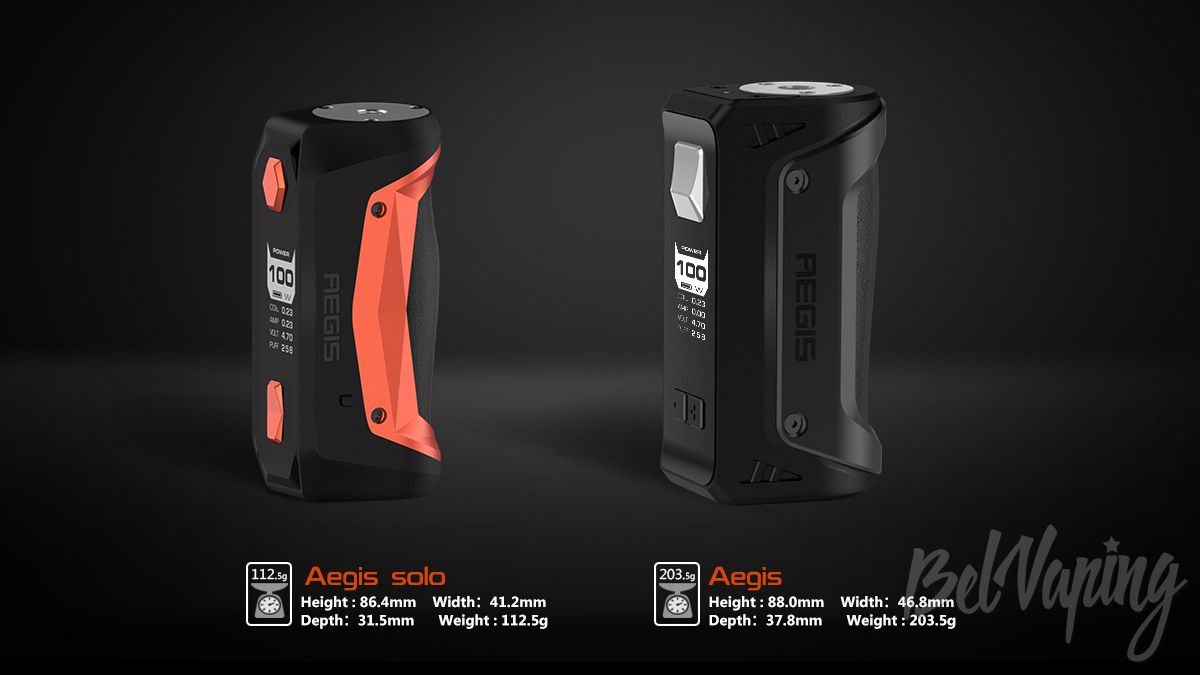 Compared with the first version, Aegis Solo noticeably reduced in size. And if the height of the device has changed not so much, then here is the thickness and width in this case provide the box mod more compact dimensions. Yes, and the weight dropped almost twice. 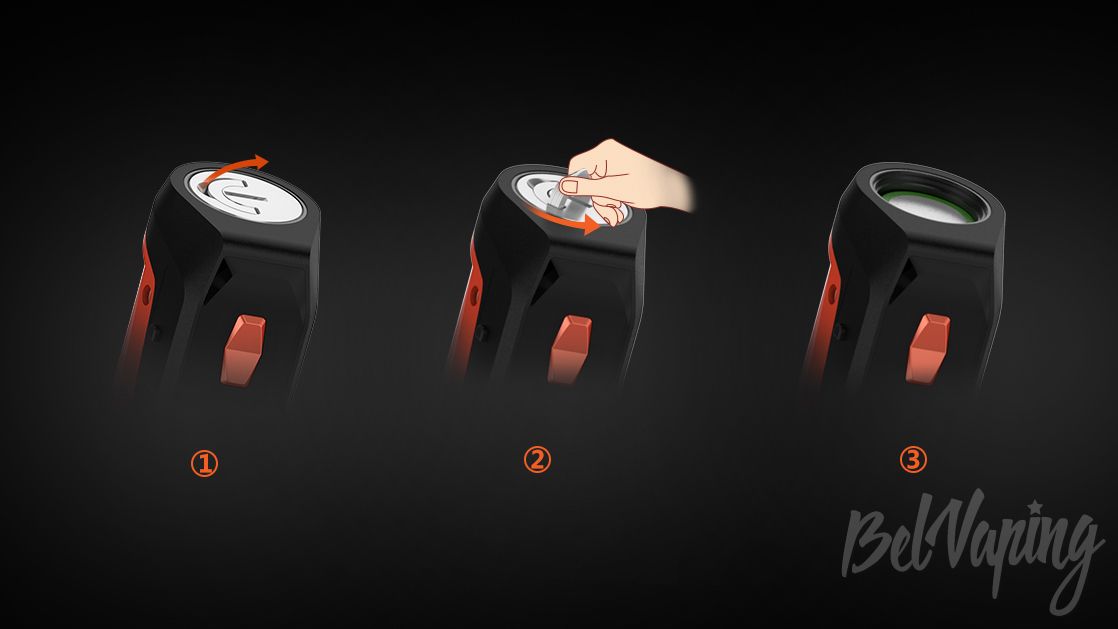 For work Aegis Solo is  now responsible for one interchangeable battery format 18650, which can be charged directly in the device with a current of 5V 1.5A. The battery compartment cover is unscrewed with a special tongue, which can be folded down in a more convenient way to get to the shaft under the battery. As for the mod functionality, it has a branded Geekvape board  with characteristic functionality for devices of this manufacturer. The maximum output power is as much as 100 watts, and the minimum supported resistance of the atomizer is 0.05Ω.

The complete tank of the Cerberus Sub Ohm Tank , in turn, is particularly unremarkable and it makes no sense to consider it in detail, especially since the lower part of the set will be in much greater demand. The clearomizer works on Super Mesh X2 evaporators from a cantal with a resistance of 0.3 Ω, and it holds 5.5 ml of solid liquid in the reservoir.

On March 6, Teslacigs presented a new device in its instagram – Tesla Invader 4X. This is a box mod with the ability to control voltage, running on two 18650 batteries and issuing up to 280 watts.

The updated version of Invader 4, the creators explained, was made on the basis of “market reviews”. What specifically, apart from the design, the new product differs is not quite clear. From the “innovations” – the lack of support for batteries of the format 21700 or 20700 and the plastic case. This technical difference ends; in the official instagram, the work on the update was called “the design of the ideal product”.

Cell Type: 2x Hi-drain 18650 cells(discharge current should be above 40A, not included) Well, summing up the theme of the new products from the company Voopoo, I introduce you to another starter kit. As you have noticed, this instance is configured more seriously than the previous one. Probably, I will not detain you much, because the copy turned out to be quite simple. Especially if you read the previous article, you will notice that some elements of new products have something in common. However, the difference between them is obvious. 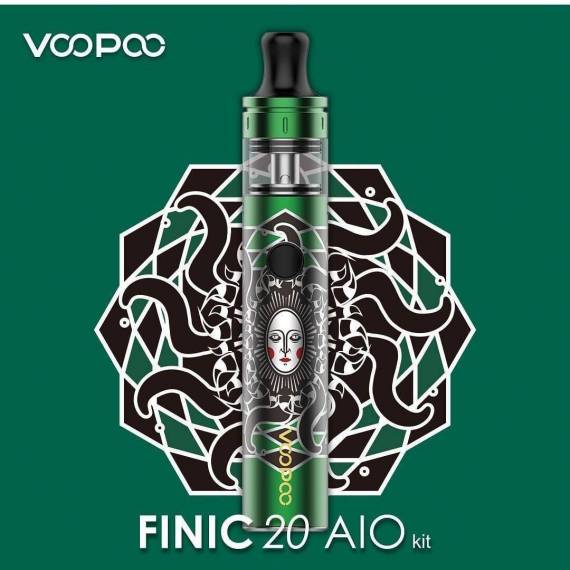 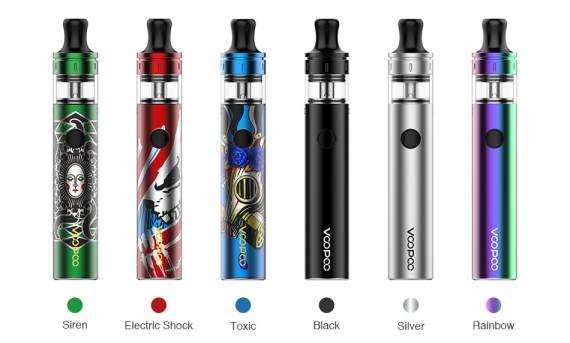 This guest of ours is a little more pleasant than the previous one, but except for the motley prints, perhaps, to catch the eye and not for anything. Quite possibly this is a plus, for the presence of vulgar decor in this segment is completely useless. It is larger, but in height it is still the same 117 mm. 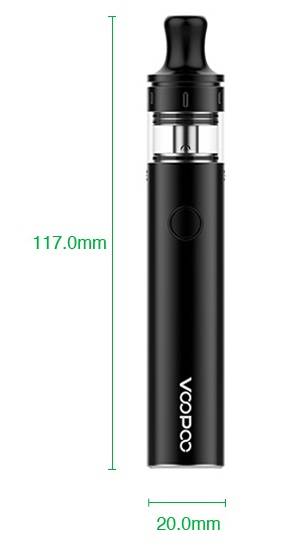 The developers have especially tried to design this model. Therefore, in addition to the standard color options, bright prints are also available from the start. And what, youth, modern – in spring. 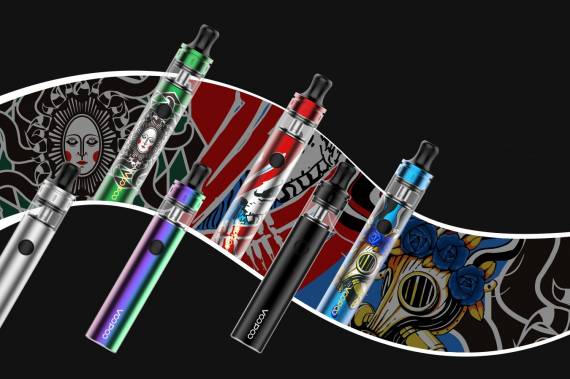 And again we see the praised drip type. Probably he really will be a convenient instance.

Screw cap again, metal thread. Holes for refueling pair, but seem quite small. The capacity, by the way, is exactly the same – small. 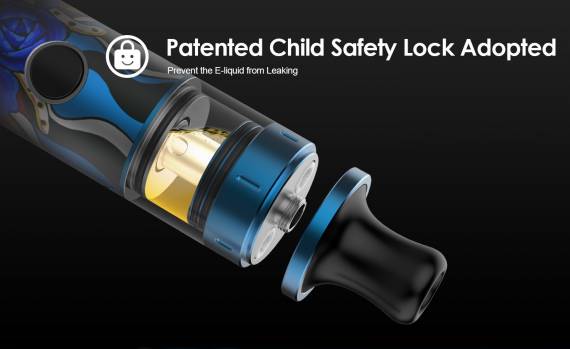 Two types of coils are presented as replaceable evaporators. The developers are positioning them for MTL and DTL. However, at the same time, we notice the already familiar grilles of air intake openings on the main body without the possibility of adjusting the blowing. Somehow it does not fit one with the other. It is possible that we do not know something, but the purely visual adjustment of the blower is not detected. 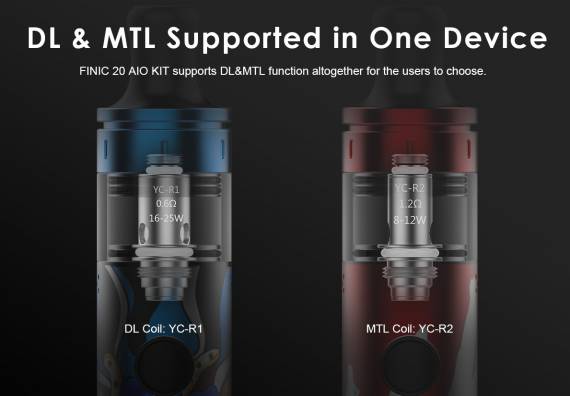 Built-in battery in this set is almost twice the size of the previous model in capacity. This is good, but the developers are again silent about the current of its charging. The button is a fayer of medium size, surrounded by an LED indicator. 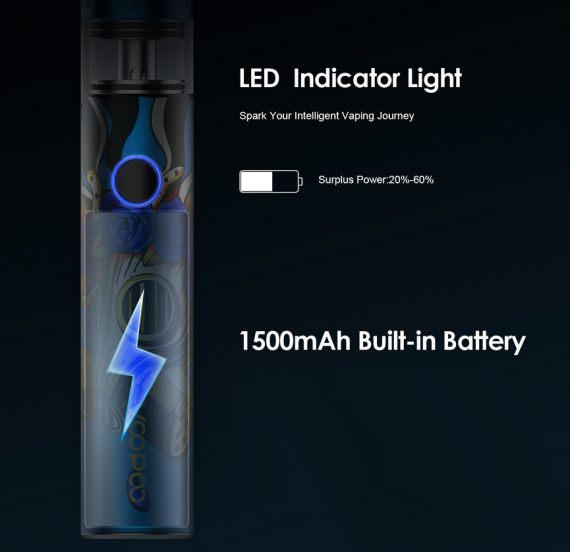 Naturally, this device is more powerful and autonomous, and accordingly more dimensional and expensive. 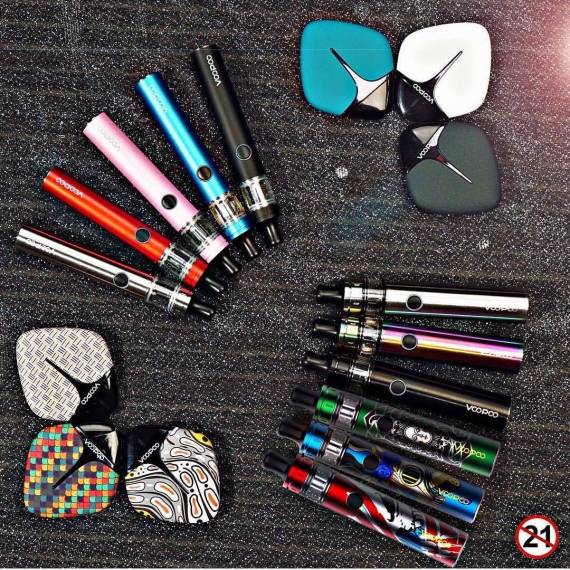 The appearance of salt nicotine and liquids based on it on the vap market made a small “revolution”, as it not only changed the vapors’ taste preferences, but also required the appearance of new devices. Naturally, such devices began to appear almost immediately – these are closed-type systems or POD-systems, the main feature of which is not abundant vaporization, but the most rapid delivery of nicotine to the body. In order to find a niche in this market segment, almost all manufacturers began to produce such systems, somehow trying to surprise users with functionality or design. The Smoant developers managed to simultaneously combine both the functionality and the original design in the Karat POD system, which sits nicely in the hand, equipped with an innovative quartz evaporator and a quite decent battery.

Karat Pod Kit by Smoant is a fairly overall POD system made of metal, equipped with a built-in battery and working on replaceable cartridges in which quartz evaporators are installed. Designers of the company did not make a miniature system, paying more attention to appearance, but do not think that the system is very large – it fits perfectly in hand. The use of quartz evaporators allows not only to maximize the taste of the liquid, but also significantly prolongs the life of the cartridge. The company Smoant offers a device in five colors, both classical and bright colors – bronze blue, black, steel-gray, rainbow and blue gradient.

It is fair to say that waiting for something unusual from the POD system is stupid, since it is already one of the simplest variants of vape devices. Therefore, in the box you can find only:

The very name of Karat Pod Kit by Smoant hints at how the device belongs to the jewelry theme. It is therefore not surprising that it is made in the form of some kind of faceted crystal or precious stone. It is difficult to say at once who exactly the device is designed for, as the design is rather ambiguous, but at the same time 100% eye-catching. Taking into account the fact that color performances are diverse, you can get a device that not only allows you to float liquids based on salt nicotine, but also becomes a full-fledged element of style and image.

It cannot be said that the Karat Pod Kit by Smoant is different in its miniature size – it is much larger than “felt-tip pens” or “thermometers,” but at the same time it fits perfectly in the hand, both in male and female. This device is made of zinc alloy with plastic inserts, because of which its weight is rather big, but not critical.

The built-in 370 mAh battery allows (as the manufacturer claims) to make 220 full puffs with a full charge without loss of taste, which is good enough for such a device. Charging is performed using a micro-USB connector located on the side of the device. An important feature of charging is that it is 0.5A and the battery is fully charged in an hour and a half.

Evaporator and features of use

In Karat Pod Kit by Smoant, replaceable cartridges are used, which is quite natural for such devices. But, in contrast to evaporators from other manufacturers that use cantal or nichrome as a heating element, Karat uses quartz heating elements. This technical solution allows you to maximize the taste and significantly extend the life of the cartridge. The evaporator resistance is 1.3 ohms and 3.4 volts are fed to it.

If we talk about tightening in the Karat Pod Kit by Smoant, then it is tight enough that a fan of cigarette puffs will especially like. Activation occurs automatically – when tightening. Refilling the cartridge is as simple as possible – it is removed, turned over, two silicone plugs are lifted, and 2 ml of liquid is poured (it is advisable to use bottles with a thin metal spout, since the filling holes are small).

We can confidently say that the Karat Pod Kit by Smoant is an interesting device, not only for its design, but also for its performance characteristics. The device will not only calmly float liquids on salt nicotine, but also become an image element of the modern city dweller.